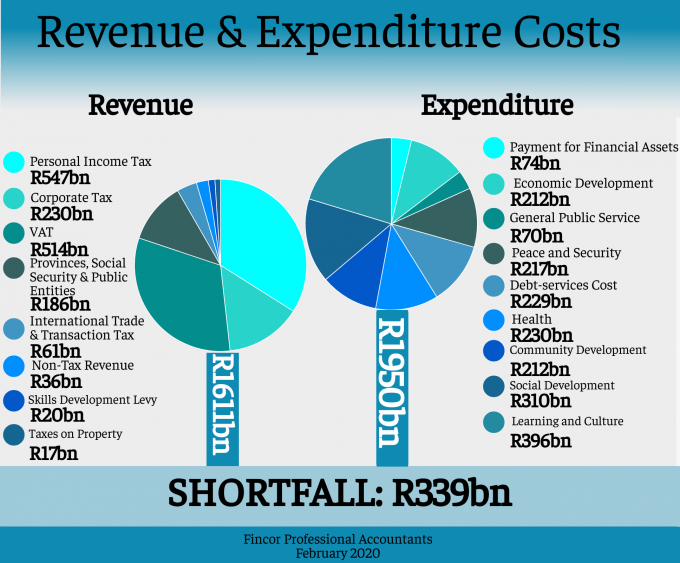 Earlier in February 2020 there appeared to be widespread panic around the upcoming 2020 Budget to be presented by Minister Mboweni.  The concerns were that a significant increase in tax-related options would be exercised by the Minister and the panic would ultimately fall away in light of a number of positive outcomes delivered by the Minister.

Despite positive outcomes, the matter of projected poor economic growth of 1.5% in 2019 and 1.7% in 2020 which has since been adjusted downwards to 0.9% in 2020 left many with serious concern that issues such as unemployment would become even worse.

The 2020 Budget aims to reduce the main budget expenditure baseline by R156.1 billion over the next three years in comparison with 2019 Budget projections. The net reduction is mainly the result of a

R160.2 billion reduction to the wage bill of national and provincial departments, and national public entities and through reallocations and additions totaling R111.1 billion, of which R60.1 billion is set aside for Eskom and SAA.

Whilst the matters SAA and Eskom’s constant financial woes leave many with a feeling of frustration and anger it should not shroud the fact that the government employee wage bill will be reduced by R160 million over 3 years. This is a good start to reigning in the ever-increasing expenditure in government however it will have a knock-on effect to employment numbers. Several labour unions will no doubt resist Mr. Mboweni’s plan. Is R160 billion enough? Probably not as a revenue vs expenditure shortfall of R370 billion is projected for the 2020 budget year! Keep in mind that only a portion of the projected R160 billion reduction in the wage bill is applicable to the 2020 budget year.

The personal income tax brackets and the primary, secondary and tertiary rebates will be increased by 5.2% for 2020/21, which is above the expected inflation of 4.4%.

Government will increase the cap on the exemption of foreign remuneration earned by South African tax residents to R1.25 million per year, effective 01 March 2020.

To support the property market, the threshold for transfer duties has been adjusted. Property costing R1 million or less will no longer be subject to transfer duty.

A new SARS Centre focused on wealthy individuals who have complex tax arrangements will be introduced.

The venture capital company tax incentive regime has a sunset clause of 30 June 2021. Government will review the effectiveness, impact and role of this regime to ascertain whether the incentive should be discontinued.

The Income Tax Act has rules to address dividend tax avoidance transactions whereby listed shares are lent or transferred as collateral from a person that would be liable for the tax to a tax-exempt person. The borrower or recipient of the collateral receives the exempt dividend and pays a manufactured dividend to the lender or provider of the collateral. There is no doubt that anti-avoidance rules will be extended to cover situations where additional exempt parties are involved to facilitate the avoidance transactions.

The interaction between anti-avoidance rules for de-grouping after the conclusion of certain intra-group transactions and rules for the transfer of assets and the assumption of related debt may result in double taxation. Unbundling transactions are subject to an anti-avoidance rule that excludes the shareholders and the unbundling company from benefiting from the rollover relief if 20% or more of the shares in the unbundled company are held by non-residents – either alone or together with individuals connected to those non-residents – after the transaction. This rule aims to limit the extent to which taxpayers can distribute tax-free shares in resident companies to non-residents. The current rule creates a loophole. Again, legislation will be amended to address these issues.

ACQUISITION OF ASSETS IN EXCHANGE FOR DEBT ISSUED

The Income Tax Act lists rules for the tax treatment of “share for share” and “asset for share” transactions, and for curbing value-shifting arrangements under these transactions but legislation will be amended to correct unintended consequences relating to the calculation of the base cost of assets subject to these types of transactions.

In 2016 and 2017, anti-avoidance measures were introduced to curb the transfer of growth assets to trusts using low interest or interest-free loans made to companies owned by trusts however it appears that taxpayers have found a means to circumvent the adjusted rules by subscribing for preference shares in companies owned by trusts that are connected to the individuals. The tax rules preventing tax avoidance may soon be amended.

There appears to be uncertainty regarding the value of supply rule that applies in certain circumstances related to debt and VAT. One example is given as follows: where a vendor, who is required to account for VAT on an invoice basis, has made an input tax deduction for the VAT they were charged on a taxable supply and that vendor has not paid the full consideration within a 12-month period, that vendor will be required to account for output tax on the unpaid amount. The VAT Act only provides clarity on the time of supply within which such output tax is to be declared. Government will need to provide clarity to address this matter.

A number of employer bursary schemes seek to reclassify ordinary remuneration as a tax-exempt bursary granted to the dependents of an employee. Government has closed this loophole. These amendments take effect on 1 March 2020.

We are well aware that SARS may refuse to authorise a refund until a taxpayer furnishes any outstanding returns however it is not a well-known fact that this may apply to the Employment Tax Incentive Act too. As all labour related taxes and levies are integrated in one way or another it appears that similar provisions across all forms of tax legislation will be reviewed to determine if they can be consolidated into a single provision applicable to all tax types under the Tax Administration Act.

The ETI is aimed at encouraging employers to hire young work seekers. It reduces an employer’s cost of hiring work seekers between the age of 18 and 29 by allowing the employer to reduce its monthly

employees’ tax (PAYE) liability by an amount of up to R1 000 per qualifying employee.

If an employer did not claim the ETI in respect of a particular month despite it being available in respect of that month, then the employer would still be entitled to claim it in a subsequent month. Any

unclaimed ETI will be forfeited by the employer if it is not claimed by the end of August or February, whichever is the last month of the relevant employees’ tax reconciliation period.

An employer may only claim the ETI in respect of a particular month if it has no outstanding tax returns or tax debts on the last day of that month. However, if the employer is non-compliant, it would be entitled to roll-over the available but unclaimed ETI in respect of the particular month to a subsequent month in which it becomes tax compliant, even if this month falls after the August or February employees’ tax reconciliation deadlines.

Currently, tax-deductible capital expenditure incurred on a mine may not be used to reduce the taxable income of another mine owned by the same taxpayer unless the Minister of Finance, in consultation

with the Minister of Mineral Resources and Energy, agrees. As this allows a significant degree of discretion to be used by the Departments involved there is no doubt that the legislation must be reviewed and amended to ensure consistent application of the law.